The use of child labour in tobacco growing is very dangerous and is prohibited worldwide. Despite this, there are children working on plantations in all the major tobacco-producing countries. As a result, many contract the Green Tobacco Sickness and have a high risk for pesticide poisoning.

Children on the fields

In Malawi alone, there are about 78,000 children working on tobacco plantations. But child labour is also widespread in other countries such as Brazil, Indonesia, the USA and other countries.

Every year, the US Department of Labor publishes a List of Goods Produced by Child Labor or Forced Labor. In 2016, the list contained 16 countries growing tobacco using child labour. Nevertheless, the USA haven’t been listed there despite reports of child labour on US tobacco fields.1

Children start at age 5 to prepare seedbeds by turning the soil and felling trees. They weed the fields, they fertilise the tobacco plants and spray pesticides without protective gear.

During harvesting the green tobacco leaves, children are exposed to the risk of contracting nicotine poisoning, because nicotine of the wet leaves gets absorbed through their skin into their bodies. A small amount of the neurotoxic substance already causes a severe nicotine poisoning called Green Tobacco Sickness. This sickness causes nausea, vomiting, headaches and dizziness. Research conducted by Plan International shows that child workers in Malawi might absorb up to 54 milligrammes of nicotine through the skin per day. This amount is equivalent to the nicotine contained in 50 cigarettes.

Why do they work in tobacco growing?

Working on tobacco fields, these children contribute to their families’ income to make ends meet.

Due to the low prices for tobacco leaf paid by tobacco companies and plantation owners, tobacco farmers struggle to make a living. As a result, farming families are forced to grow more tobacco than they can manage by using the adults’ workforce. These farmers cannot afford to pay seasonal workers, while children and relatives are mostly not paid. Thus tobacco farming is usually family work.

Why is this child labour bad?

Child labour in tobacco growing is dangerous, because children are exposed to chemicals. Furthermore, the plant itself is poisonous. Working on tobacco fields children can get the following injuries and diseases:

Furthermore, this type of work interferes with the children’s development and impedes their education, thus baring them from escaping the cycle of poverty.

Moreover, children working on tobacco fields are exploited, because they are not paid for their work.

According to article 32 of the United Nations Convention on the Rights of the Child, children may engage in work that is not hazardous and light in nature. This is not the case with tobacco farming: Therefore, children under 18 should not be allowed to perform any tasks related to the production of tobacco.

How to prevent child labour in tobacco growing?

Tobacco companies must pay higher prices in order to enable farming families to live on their work without involving their childrenin hazardous work. Corporate Social Responsibility programmes of the tobacco industry as well as industry funded organisations such as the Eliminating Child Labour in Tobacco Growing Foundation are only white washing the corporations’ image.

Basic rights of farmers and workers on tobacco plantations e.g. in Malawi have to be respected. They need legally enforcable contracts and sufficient payments.

The UN Convention on the Rights of the Child stipulates compulsory primary education which has to be enforced. Moreover, there is an urgent need for more schools in tobacco growing areas (e.g. in Malawi).

School meal programmes are a good incentive for parents to send their children to school. Particularly if locally grown food is used to feed the students, it creates opportunities for alternative livelihoods in tobacco growing areas. 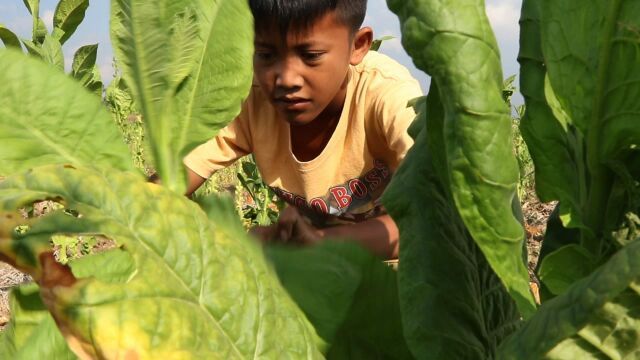 Rahmad* (10 years) lives in Indonesia and supports his parents in the tobacco fields. He tells: “When my brother is spraying, I am
cleaning the weeds. It stinks. Every time I smell the spray I feel dizzy and
nauseous.”

During the harvest, Rahmad is often in the fields instead of school.

Stay up to date with the Unfairtobacco newsletter!

Subscribe to our newsletter to receive news about our work, new publications and events.
We will exclusively use your email address for providing you with our newsletter. We will not hand your personal data on to third parties. You can unsubscribe from our newsletter anytime.

1,900 ha of tobacco-cultivated land will be new planted

British human rights lawyers bring a case against BAT and say that the corporation is responsible for child labour in its supply chain.

Cape Town Declaration on Human Rights and a Tobacco-free World

Governments have the duty, as well as the right, to protect their citizens from the tobacco industry because the continued production and marketing of tobacco products violates rights from seedbed to butts, including child labor, workers' rights and the human rights to health and life.

Factsheet Children have a Right to a Tobacco-free World

This factsheet shows which children's rights are violated by smoking and tobacco cultivation.

This factsheet shows the health risks for workers inherent in secondhand smoke at workplaces and in working conditions in tobacco growing.