In the face of the acute hunger crisis in Africa, the devastating impact of the climate phenomenon El Niño has been repeatedly in the news. But reports tend to neglect the various structural causes for hunger and poverty like industrialised agriculture and cash crop monoculture for the export among others.

In the SDG-Factsheet No. 1: Tobacco | Poverty | Hunger we trace these interrelations.

More than 17 million people around the world work in tobacco farming, primarily in low- and middle-income countries. Many smallholder farmers have difficulties in making a living from tobacco, since the earnings are often so low that there is no money left to pay any workers. This in turn fosters the use of child labour. 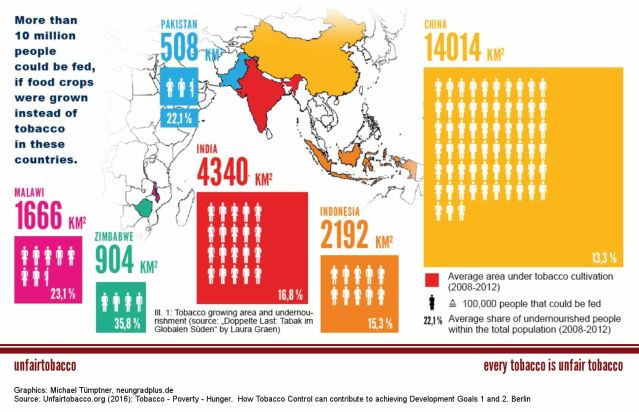 In six of the top ten tobacco producing countries a significant share of the population is undernourished. More than ten million people could be fed, if food crops were grown instead of tobacco in these countries.

What can be done?

In order to combat poverty and hunger amongst tobacco growers, it is necessary to change the structures in tobacco trade to reduce the power asymmetry between smallholder farmers and multinational corporations.

In the SDG-Factsheet No. 1: Tobacco | Poverty | Hunger we show practical suggestions for a change in the tobacco sector.

We also explain, what the Sustainable Develoment Goals are, why tobacco consumption and poverty are interdependent and where to get more information.

More than ten million people could be fed, if food crops were grown instead of tobacco in these countries.

Tobacco does not only harm its consumers, but also the farmers who grow it. The plant contains the poison nicotine adhering to the fresh green leaves which can be absorbed through the skin particularly in wet conditions (morning dew, rain, sweat). This may result in an acute nicotine poisoning known as Green Tobacco Sickness. It leads to dizziness, nausea, vomiting, headaches, and weak muscles.

This is particularly dangerous for the numerous children working in tobacco fields all over the world. Without protection and under wet conditions, workers can get into contact with an amount of 54 mg nicotine per day - the amount of nicotine contained in 50 cigarettes. Even if they don't smoke themselves, after the harvesting season, the workers' blood can contain as much nicotine as the blood of heavy smokers.

Furthermore, nicotine weakens the immune system and can boost cancer as well as metabolic diseases such as diabetes.

Very often, farmers do not have enough resources to buy protection gear. Additionally, they have to calculate the risk of nicotine poisoning against the risk of overheating. Particularly the children on the fields have an increased risk of suffering from life threatening heat strokes and dehydration.

All Questions
Is there any fairtrade tobacco?
Show Answer

Is there any fairtrade tobacco?

No, there is no such thing like fairtrade tobacco.

The label fairtrade indicates fair production conditions: health and safety measures for workers, no child labour, fair wages and prices. This is well known from coffee, chocolate or tea. But for tobacco there ain't no fairtrade standards nor a fairtrade label.

Neither the cultivation nor the use of tobacco are consistent with the principles of fairtrade due to its negative social, ecological and health impact. Members of the fairtrade network, therefore, do not at all consider tobacco in their product lines.

Tobacco harms the health of its consumers. Cigarettes kill half of their consumers and cause longtime illnesses for many users.

Tobacco also harms the producers. Tobacco growing destroys the environment due to deforestation and the heavy use of pesticides. Futhermore, tobacco growing has a negative impact on the food security of the farmers and the whole population in tobacco growing areas.

1,900 ha of tobacco-cultivated land will be new planted

Kenaf is the future

The Malaysian geovernment plans to make kenaf the third most important contributor to the economy after rubber and palm oil.

Food security, or tobacco only?

The New Alliance for Food Security and Nutrition (NAFSN) in Malawi cooperates with tobacco companies, thus ignoring the country’s urgent necessity to move away from its dependence on tobacco exports.

COP7: Progress for Growers and Environment

What are the outcomes of COP7 for tobacco growers and the environment?

The use of child labour in tobacco growing is very dangerous and is prohibited worldwide. Read here about countries where children still work on tobacco fields.

Tobacco is an obstacle to sustainable development. Read here about how tobacco harms people and the environment and its impact on sustainability.

This study uses tobacco consumption and tobacco cultivation as an example to show the interlinkages between the Sustainable Development Goals (SDGs).

This factsheet shows the health risks for workers inherent in secondhand smoke at workplaces and in working conditions in tobacco growing.